Hi all, I asked Patricia Harte to send a report of her experience of the open road racing events she has entered so far. She sent a great report and her insight in to the open race scene. Have a read below. Trisha has improved each week and finished in 2nd lady home over the weekend in the Seven Springs GP in Loughrea, bare in mind there was no specific ladies race and she had to race in the A4 bunch. Congrats from all in WLCC get it going 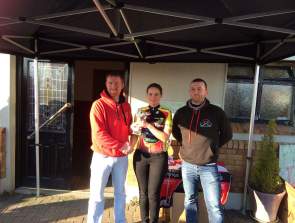 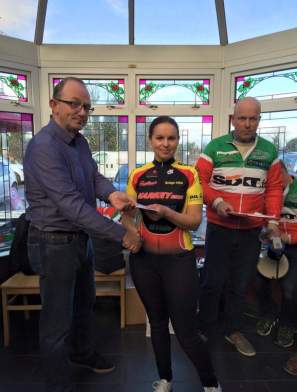 "My introduction to open racing began in Dundalk in February with the Traders Cup... My nerves kicked in about 2 weeks prior! As I drove to sign on, warmed up and got to the start line thoughts of 'why am I putting myself through this?' And 'will I get dropped in the first few hundred metres because I can't clip in quickly enough?' ran through my mind! Thankfully, it was a ladies only race with approx 15 starters including some newbies like myself. The course was a flat 40km and with a headwind starting out the pace was steady... Until a few kms later when everyone went 'mad'!! I thought the Supervalu bull had made it's way over from Ballinrobe Mart and was chasing us.. But no.. Someone had attacked and we were all chasing her. And so it began.. I had been forewarned that the ladies races were 'up and down'. I quickly learned what that meant! That day I finished in the second bunch with a few other girls.. Delighted with myself!

The following weekends racing was to take me to NAvan. The ladies race was over 70km. Again approx 15 starters. This time the nerves only kicked in 2-3 days before the event.. Clipping in wasn't a worry.. I had bigger fears.. Like the climb stuck in the middle of the 2 lap circuit! Sure enough, there was a KOH at the top, which initiated an attack at the base, which resulted in me slowly loosing contact with the majority of the field. I did the remainder of the lap on my own and thankfully found 2 other girls for the last lap. Again, I was delighted to finish and finish with people!

My 3rd race was in Clonard. I was warned this would be a fast start as it was a 44km flat course. The field was bigger with 30 ladies signed on. Straight away there was an attack. Not really having a clue what to do I went with them. We were brought back a few minutes later by the main bunch. After that, I had a little chat with myself and decided as a clueless beginner I was better to stay in the bunch and see how I got on. At some point, the eventual winner Michelle O'Halloran (Lakeside Wheelers) made a solo break and stayed away. I joined the sprint at the end and got 4th! I felt like I had won the Tour de France!

Thankfully the following weekend I got a rest from the travelling and the physical and mental stress of the racing. I needed it.

My next race was 7 Springs GP. It was my first A4 race ( 3 Laps of a slightly technical slightly draggy course). Our bunch was big, over 70 riders and by far the biggest bunch I had ever been in. It was a great buzz though tense at times with some braking and shouting. After staying with the bunch for one lap, then 2 laps, I was feeling good and started to feel confident I could finish with them. Then, out of the corner of my eye, a bike and a man flew up into the air. Clanging sounds from behind became audible. Ploughing on to catch the bunch I wondered what carnage was behind me. The rest of the race was thankfully uneventful. A puncture in front of me a few hundred metres from the line meant I lost a bit of contact with the bunch and rolled in just behind them. Again, delighted to finish in one piece, 2nd lady, and have averaged just over 37km/hr over the 51km.

I hesitated in writing this report when asked by Dave Connolly. I didn't know whether racing would be for me or whether I'd enjoy it. I think I may have caught the bug! Thank you to everyone who encouraged me and helped prepare me for racing ( ye know who ye are). Thanks also to my friend Ger Powderly (Tuam CC) for brainwashing me to the start line! ... It's all your fault!! ( meant in the nicest way possible!)"