Wow what a week for Bike Week, it all started last Sunday with eth Croi Tour De Lough Corrib, this was well attended by WLCC, and local Groups, Holly Wheelers and Tri Lakes.

WLCC cycled up to the event and went in the opposite direction and covered 130km, it turned in to a race from Cornamona to Cong as these things do, practice for the WLCC league.

On Tuesday we had a newbie night and family cycle, the town was buys as the 5km series also took place. This went well and great to see new faces out and about. The Thursday spins are going well and back to the Tuesday evening spins from next week.

The Cornamona 50 Mile is on Saturday form Cornamona at 10.30am and the Tour de Burren is on in Clare, Tuam are holding a Cancer Care West event on Sunday form Tuam, so there is plenty of events to attend over the weekend.

The John Hollian race took place from Cross and the A4 group contested the final with Westport lad taking the first place, fair play to Jerry Towey who took 6th place, he really enjoyed it by all accounts. 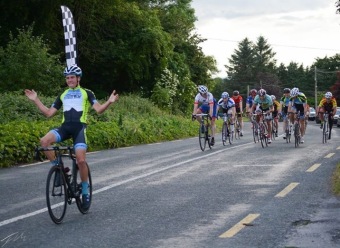 On Wednesday evening the first Round of the Western Lakes CC club league took place in Hollymount, 32 members signed on which in its self was a great achievement.

Sign on was in the Football pitch, the race started up the street and 4 groups were given handicaps. The scratch group had 9 minutes to wait after the first group started. It was a fine evening but a serious breeze took its toll on the event. After the first lap the motorbike passed the first group and all of a sudden the second motorbike passed, all the groups merged in the village of Hollymount and it was a good spectacle for the spectators. The scratch group caught the second and third group to form a big peloton which stayed together for most of the second lap. Coming to Ger Kirranes  Padraig. Marrey attacked and brought Sean O Malley with him, they were followed by Brendan Butler and John Gill but they could not catch the former A1 or the existing A1 who crossed the line in first and second. Refreshments were served in Finnertys after the race and a good bit of banter and crack was had by all. The finish was shown on TV and the results were given out. Please see link below to spread sheet of the results. This was very enjoyable race and the same again can be expected on the next round in Kilmaine on July the 13th, the race co-ordinator is Gerry Sheridan

The Claremorris Crit takes place on Friday evening at 8.40pm, it is great to watch the fast racing form close quarters, please show support or help out with the race.